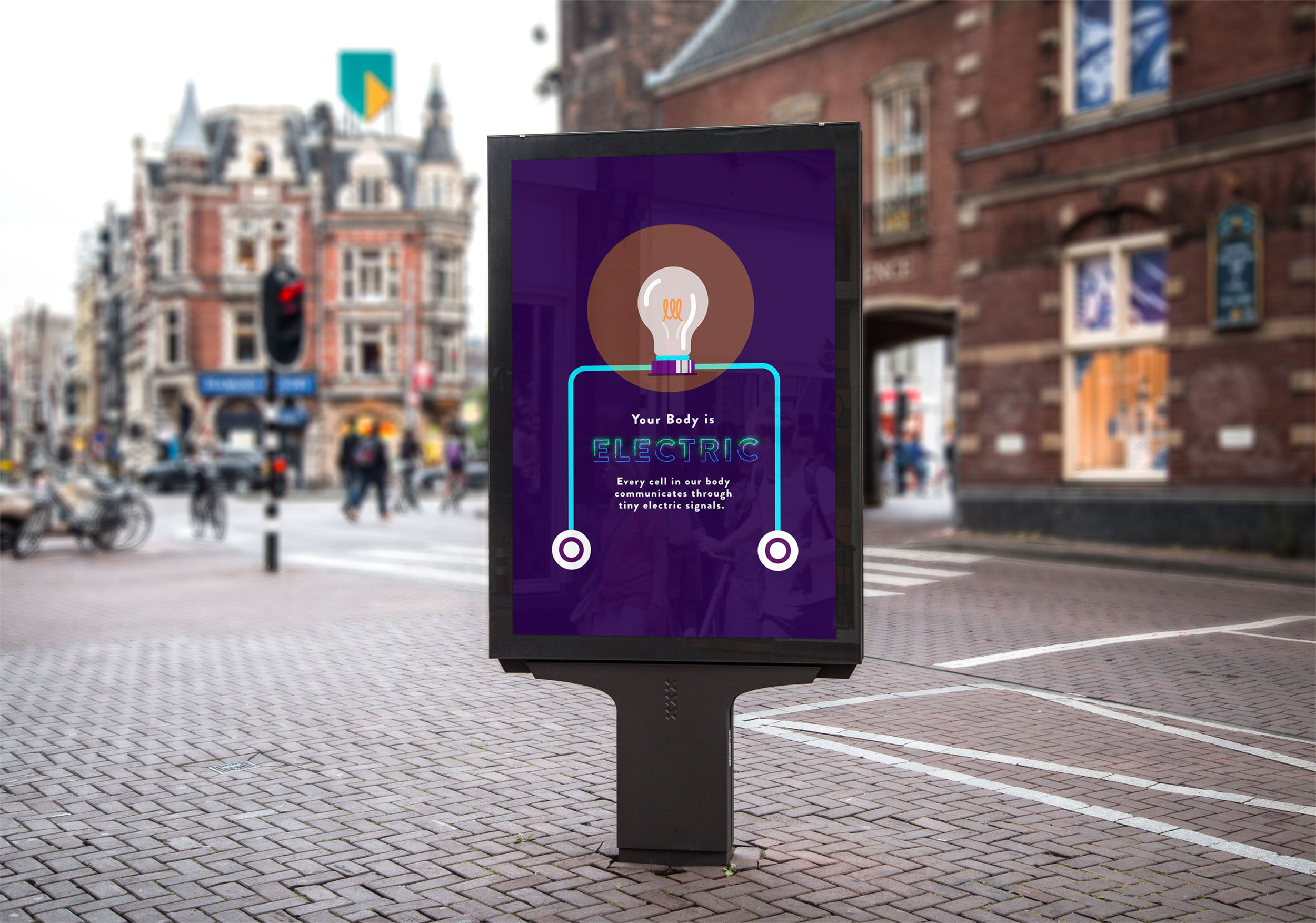 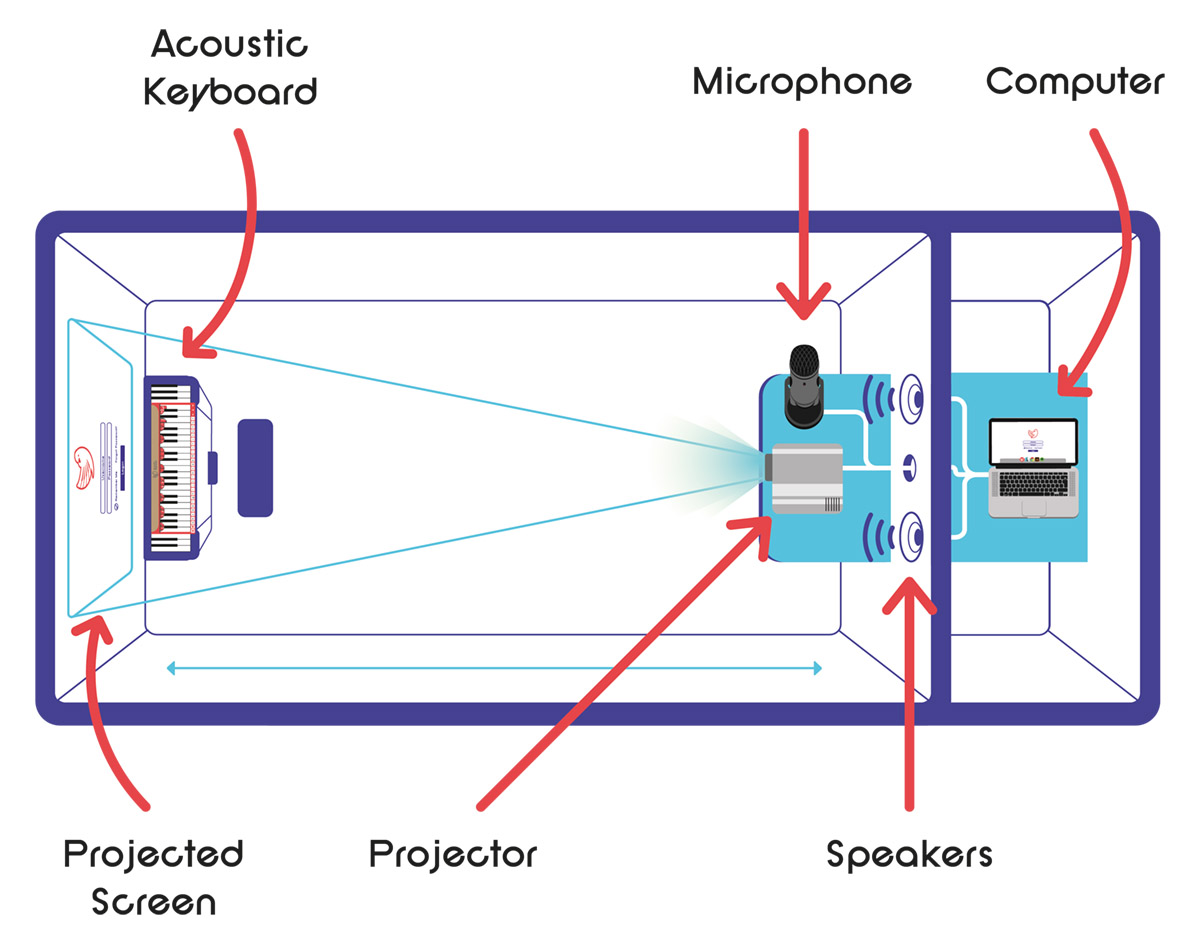 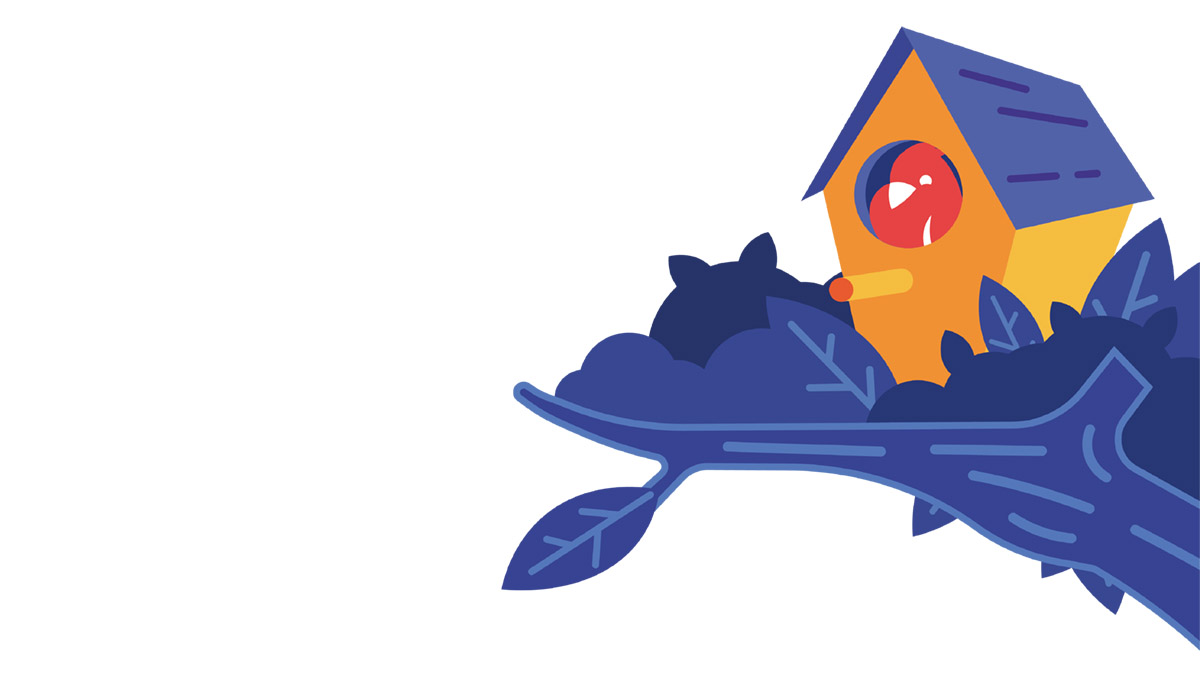 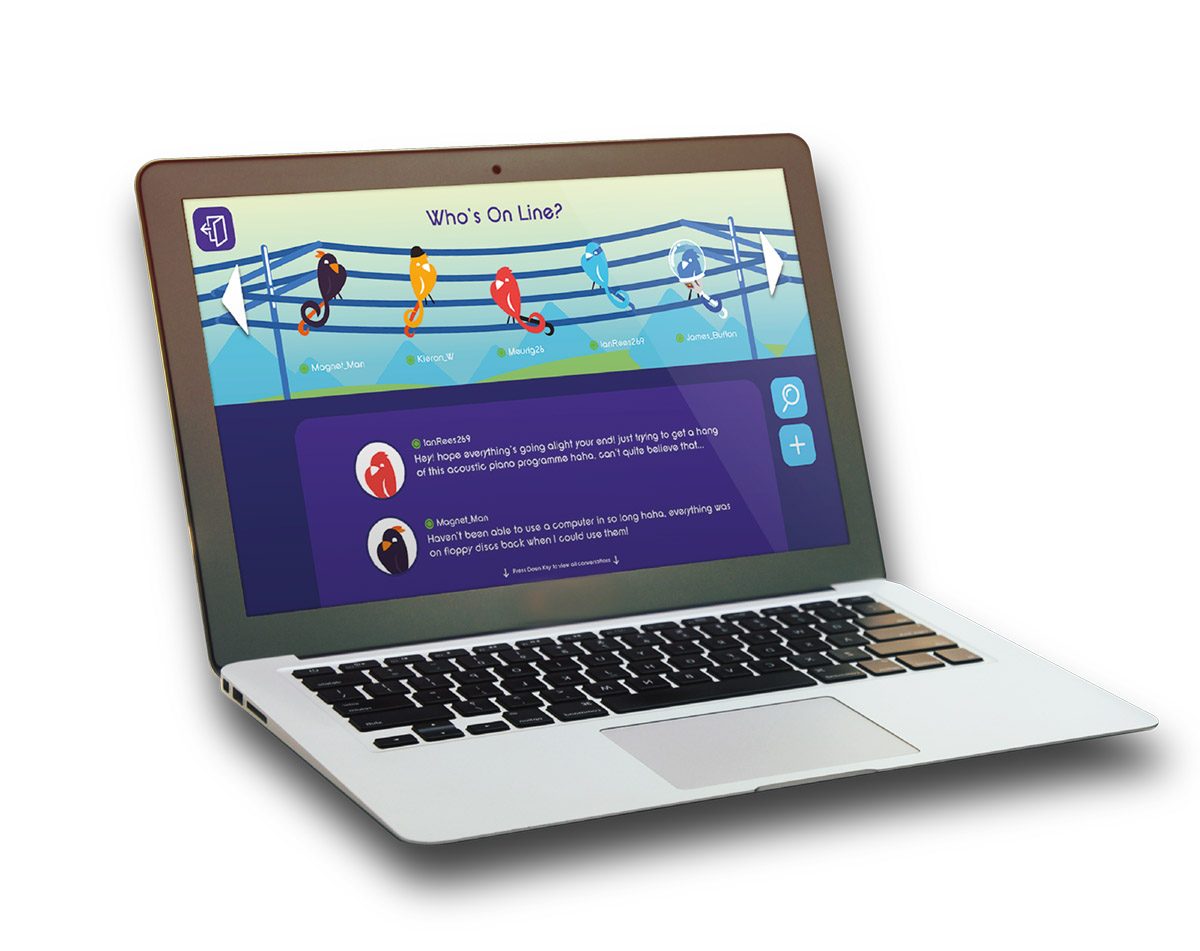 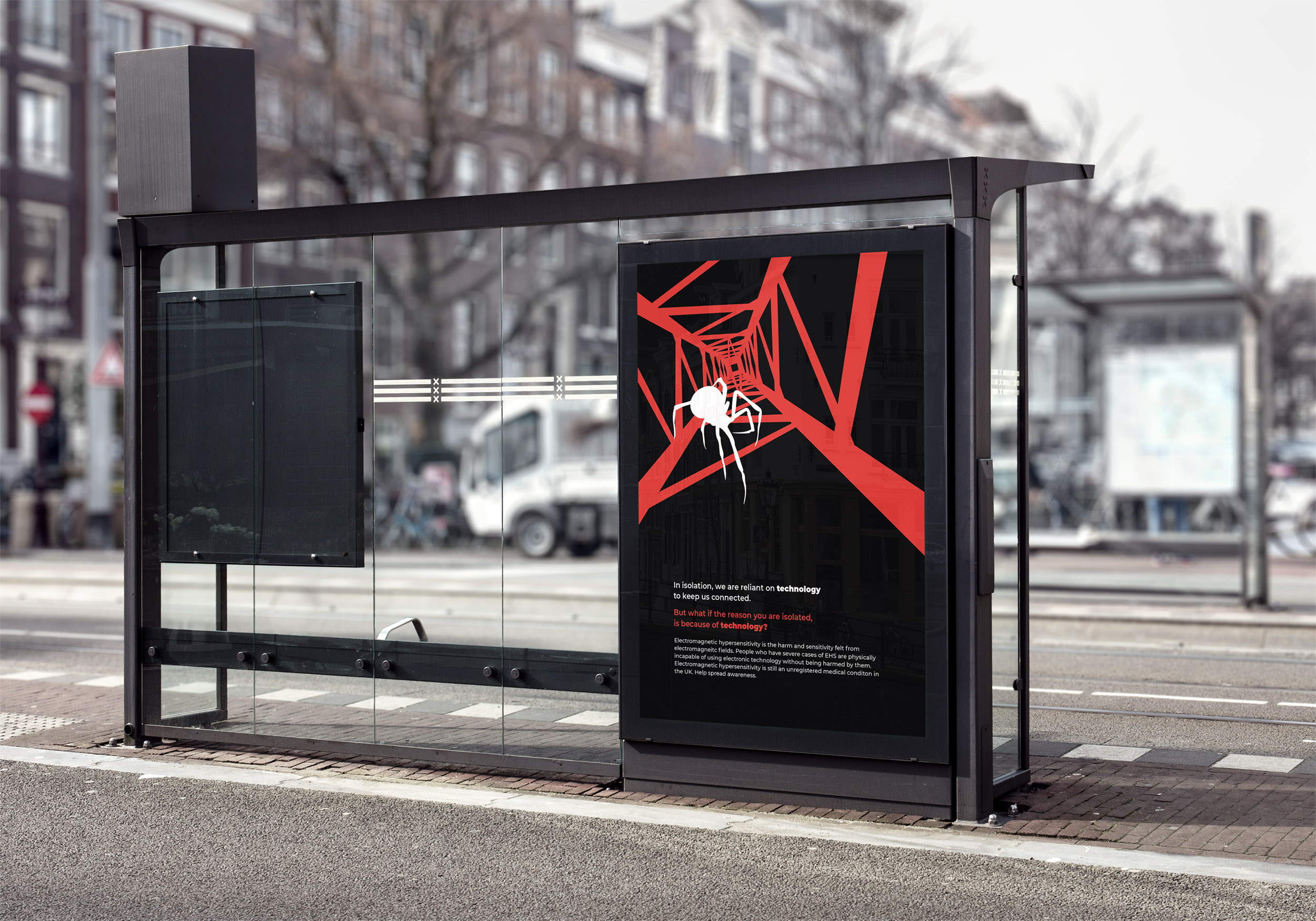 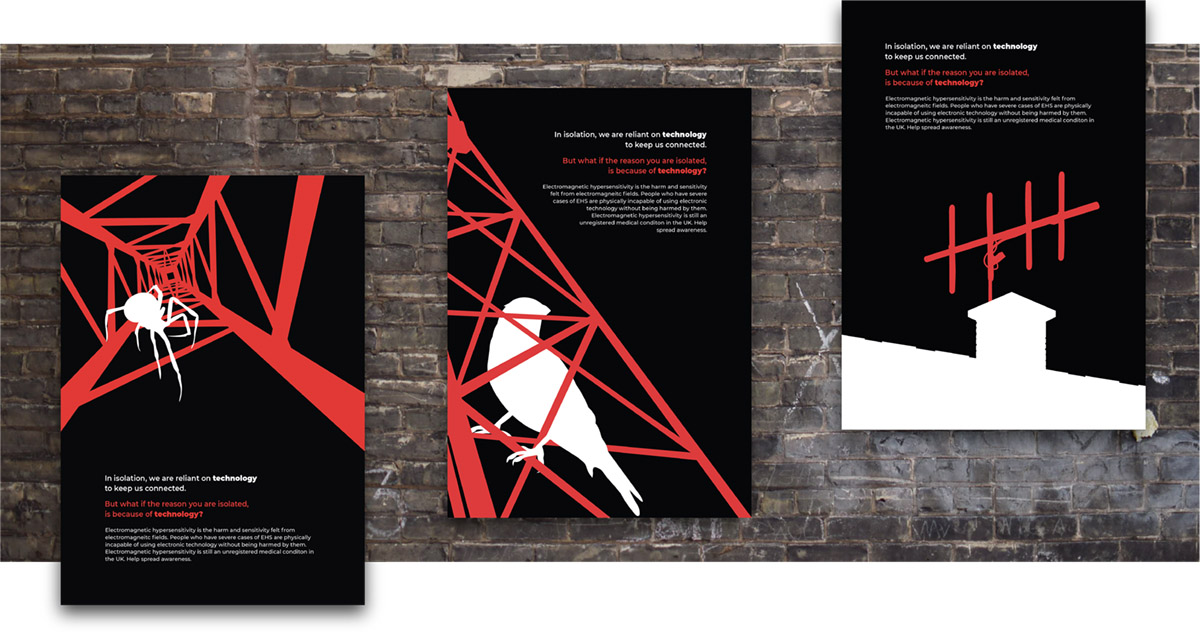 Symptoms from EHS include headaches, fatigue, sleep deprivation, burning & stabbing sensations, heart palpitations, seizures and many other health problems. People who have severe cases are unable to go near any electronic technology which emits an electromagnetic field. They have had to leave their homes, jobs & relationships behind to seek refuge in rural areas where technology isn’t in such high volumes. They are cut off from the world, unable to use simple technology which we take for granted. Despite this, EHS is still an unrecognised medical condition in the UK and unknown to the majority of the public.

How can people with severe cases of EHS use technology? My main solution focuses on being able to operate technology, without it being close enough to harm the user. The concept uses notes from an acoustic piano to operate a computer. Notes can be translated into letters, numbers & commands via a microphone. This information is then displayed to the user through a projector to maintain a safe distance.

What is Electromagnetic Hypersensitivity?

A large majority of the public are unaware of the existence of Electromagnetic Hypersensitivity. From first hand experience and various interviews I conducted, most people didn’t believe the medical condition even existed and many refused to believe that their beloved technology could cause such harm.

The condition itself is quite an irregular one and difficult to grasp or believe without context. To explain this to the public, I developed an interactive awareness campaign which explained how our ‘Body is electric’. The human body communicates through a system of tiny electric pulses between the nerves. Electromagnetic signals interfere with these pulses but people with EHS are the only ones to properly feel their effects.

To depict this to someone who has never heard of EHS, I used a simple light bulb circuit to convey how everyone’s bodies are electric. The user would complete a circuit using their own body. The campaign offers an explanation to what EHS is and how they can aid the cause by spreading awareness themselves.

Technology, at a distance

For such an unusual condition, the solution had to be quite different. We rely on technology every day to do the most simple of tasks. Technology is continually humanising and integrating into our everyday lives. Sufferers with EHS are essentially sent back to a time before the industrial revolution. From my research, the main problem they suffer with is isolation. They can’t simply use a phone or computer to message someone instantly, they have to rely on writing letters and other people to see them which can take time. Simple tasks such as “Googling” an answer via the internet aren’t possible.

To allow EHS sufferers to use electronic technologies without causing harm to them, I developed a concept for a system which removed the need for technology near the user. The user plays an acoustic piano to operate a computer from afar. The electronics are all positioned at a safe distance. Each note is translated into letters, numbers or commands which controls a computer. A projector would then display the Acoustic Keyboard interface in front of the user to maintain a safe distance. The projector would act as a monitor and the piano would act as a keyboard. Using a piano to control a basic computer would prove extremely difficult, so I developed a user friendly interface designed to navigate a piano keyboard system.

Drastically shifting in tone, I needed to show how the industry is turning a blind eye to EHS. Industry has a huge influence over how conditions like these are perceived by the public.  It is not in their interests for the public to think that their products are harmful in any way. Similar to how industry led research and false advertising in the 1950’s tried to cover up how cigarettes were a direct cause of cancer.  If industry had shown their products were harmful it would have effected their profits.

This awareness campaign is aimed towards industry to call them out on the harm their products & devices are potentially causing. With new technologies being created and developed everyday, there needs to be a drastic change to the electromagnetic radiation the public is exposed to. More and more people are becoming hypersensitive to electromagnetic fields.

Industry need to acknowledge the problem and make efforts to help and accommodate EHS sufferers.

Your Body Is Electric

I decided that using an interactive piece would not only explain the topic better but engage the target audience far more than a simple stand-alone poster campaign.

Speaking with experts on the topic and sufferers of EHS, I gathered an insight into how they cope with day to day life, the main symptoms of the condition and how it directly affects them. As the interactive campaign is intended to educate the public, a call to action is used to promote the viewer to share the video around, spreading the campaign’s reach and placing EHS further into the public domain.

Technology, at a distance

Amid the Covid-19 outbreak, we have become even more dependent on technology to keep us connected with colleagues, friends and family. The only way we can stay connected during isolation is through the use of technology.

But what if the reason you’re isolating is because of technology? Drawing comparisons from the Corona virus lock down and what EHS sufferers have to endure on a daily basis will allow people to empathise with them. It will better contextualise the medical condition so they can understand it.

The campaign uses bold stylistic imagery visualising technology which emits high electromagnetic radiation in a bad light. It conveys how these technologies isolate people with EHS.